Although Facebook Comments launched in 2011 it wasn’t until recently that I decided to implement the comment system into my blog. There were several reasons why I didn’t pull the trigger on the new comment system when it launched, but the primary reason was simply because there was no out-of-the-box method to export all the comments from my then-comment system to Facebook Comments. However, after kicking around the pros and cons for a bit, I took the plunge and installed Facebook Comments since it will reduce the number of trolls, silence the anonymous commenters, and help facilitate higher quality conversations. That being said, here’s to a fresh start!

Okay, so in this tutorial I’m going to explain how to manually implement Facebook Comments for those of you who choose not to install a plugin or unable to install a plugin due to an old WordPress version you might be running. Let’s get started.
END_OF_DOCUMENT_TOKEN_TO_BE_REPLACED

A buddy of mine left his WordPress blog unattended for several months because he wasn’t publishing new content at the time nor was he monitoring the comments. Unfortunately, his blog didn’t have a Disqus or Facebook comment system in place and he failed to include a spam filter such as Akismet with his current comment system. The result: thousands and thousands of spam comments flooded his blog posts.

At the time of this writing, WordPress doesn’t have a way for the user to send spam comments to the trash with a single click. I’m sure that feature will be added in the future, perhaps an “Empty Spam” button similar to the “Empty Trash” button, but for now the user must either manually select each spam comment and send it to the trash or install a plugin that will do the trick. Clearly the former option isn’t going to work well for anyone and sometimes installing a plugin reduces the speed of the WordPress blog.

END_OF_DOCUMENT_TOKEN_TO_BE_REPLACED 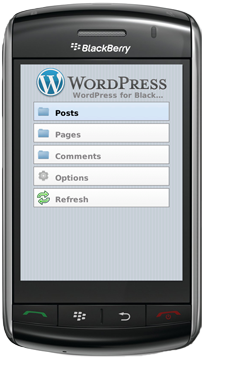 Although I don’t have a lot of time to blog, I really like the idea of having an app on my BlackBerry that will allow me to blog whenever I have the urge. I went ahead and installed WordPress for Blackberry on my Tour and it works like a charm. I’m not sure how often I will use the app to create a new blog post or edit existing pages, but it’s nice to know that there is a feature that will allow me to do it. I really like the fact, however, that I can approve, delete, or put a hold on new comments because that is always an annoying task.

END_OF_DOCUMENT_TOKEN_TO_BE_REPLACED

Soon after I installed WordPress on my Windows Home Server (WHS) which runs IIS I realized my permalink options were limited since IIS does not support mod_rewrite. I definitely wanted to produce Pretty Permalinks, therefore, I spent some time searching plausible solutions that would mimic mod_rewrite capabilities so I could accomplish this goal. What I found were several workaround tutorials that explained how to create 404 redirects while others provided instructions on how to use PHP and INI files in association with a ISAPI Rewrite Filter. Nonetheless, I was not interested in going through all the tedious steps in these workarounds so I continued doing my homework. Thanks to a project on Google Code I was able to find a solution that works perfectly and only takes minutes to implement.

Before I take you through the steps let me back up a minute for those of you who are not familiar with Pretty Permalinks. Permalinks are the permanent URLs to individual blog posts, as well as archives, categories, and other blog postings. According to WordPress, “Pretty Permalinks is the idea that URLs are frequently visible to the people who click them, and should therefore be crafted in such a way that they make sense, and not be filled with incomprehensible parameters.” For example, if you choose the permalink “Month and Name” option it would produce a URL that would look like this:

END_OF_DOCUMENT_TOKEN_TO_BE_REPLACED

When I embedded reCAPTCHA into my WordPress blog the first thing I noticed was that reCAPTCHA was sitting directly on top of the “Submit Comment” button without allowing any breathing room between the two. The appearance was rather obtrusive so I decided to do a quick search for a solution using my buddy, “Google.” Normally I would muck around with the code myself and call it a day, but I figured there was someone who already found a fix and shared it with the rest of us. As it turns out, there are many forum discussions about this same exact issue and several on the WordPress forum, yet no solutions were ever posted.

So, after wasting a few minutes searching for a solution, I decided to look through the code so I could figure out how reCAPTCHA was embedded into the comment section of the blog and attempt to correct its placement. My first instinct was to add a simple “break (<br/>)” tag in the comments.php file, above the “Submit Comment” button code, so this way it would add some space. However, this edit was unsuccessful and I quickly realized the only way to make this work was by combing the reCAPTCHA PHP file and looking for the correct section in the code to add a “<br/>” tag. After I opened the reCAPTCHA PHP file it did not take more than a minute to figure out which section needed the “<br/>.”