Early this morning I was discussing Foursquare privacy and security issues with a friend of mine on Twitter and shortly after our discussion she received a tweet from @PleaseRobMe that read, “Hi @dulcita518, your name just showed up on our website. Please read the why section!” After visiting their Twitter page and following a link in their profile, I found myself on their Web site PleaseRobMe.com. It turns out that the Web site launched today and while on the surface the site appears to be advocating burglaries, it is actually trying to bring some awareness to the risks involved when people use location-based social media services like Foursquare, Gowalla, Loopt, and others.

According to PleaseRobMe.com, any person who tweets their Foursquare check-in is not home, and thus their home is empty and they are essentially asking to be robbed. Ridiculous? Yes, absolutely. Obviously that is a false assumption because there is no evidence that a home is left empty based only on a check-in or a tweet. In other words, there could be two, three, four, or perhaps five people who live in one home and if one person decides to tweet their whereabouts, surprisingly enough, there still could be others in the home, thus not empty. Shocking, isn’t? What about the dogs that are inside the home or perhaps the sophisticated home security system? I am curious if PleaseRobMe.com takes any of this into consideration before they put someone on the list of “Recent Empty Homes.” 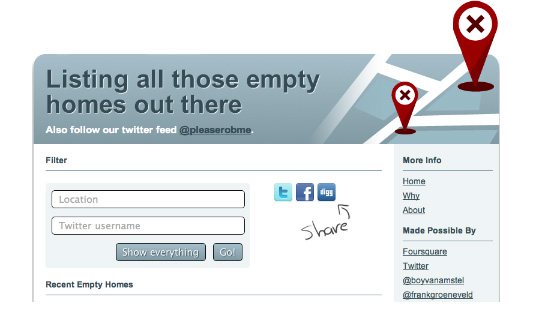 I think we all can agree that using location-based services could be a potential privacy and security risk depending how the service is being used, but I would have to disagree that using these services increase the risk of getting burglarized. Could it ever happen? Absolutely, but the odds weigh heavily against such an event occurring. Do you honestly believe that everyone, but criminals realize that most homes are empty during normal business hours? Think about it for a second, it’s publicly known that most people are at work during the day, therefore, criminals do not need to rely on social media sites to target victims. It would be a lot more difficult for a criminal to choose their victims based on social media than to simply case a home.

Let’s assume that a person tweets their Foursquare check-in location and in their Twitter profile they even disclose the city or town in which they live. The chances of a burglar monitoring that tweet, finding the person’s “current” address, getting to the location before anyone comes home, getting past the dogs, bypassing the security system, and then finally taking the time to commit the robbery, would be an amazing accomplishment. There are too many variables involved and it would not make any sense for a burglar to choose their victims based on social media alone. For the most part, criminals know exactly what they are doing and the last thing they want to do is get involved in a lengthy robbery.

Do we really want a Web site like PleaseRobMe.com to inject fear into the fun of location-based social media? Unless a criminal commits a robbery at your home and sends a status update to Twitter that reads, “You’ve just been ousted as the Mayor of Your Home!,” I would not worry too much as long as you are taking the necessary steps to protect yourself.

If you have any concerns about tweeting your Foursquare check-ins you can take steps to avoid the possibility of such events taking place.

1. Don’t seed all your Foursquare check-ins to Twitter, instead keep them on Foursquare and feel free to use the “off the grid” option when necessary.

2. If you seed check-ins to Twitter, limit the tweets to only mayorships and/or unlocked badges.

3. Only accept friend requests from people you know in real life or those friends you met through social media, but trust and have known for a long time.

4. Never check-in and then tweet you’re on vacation with the family or friends.