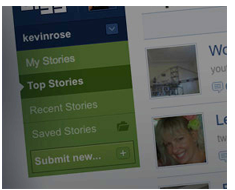 Yesterday I wrote an article about some of the changes going on at Digg and what users should expect to see in the new version of the site when it launches in a few months. While the majority of the changes are still under wraps, Digg took the stage at the “Bigg Digg Shindigg” party at SXSW and teased the crowd about some of the new features. Those people who signed up for the alpha version of the site had a chance to see a preview of the new Digg interface and those who keep tabs on the official Digg blog caught a glimpse of the new login dialog box. It’s obvious that the company is putting a lot of time and effort into the new site which houses a new backend, new infrastructure layer, new services layer, and an overall cosmetic facelift. These are major changes so it appears the company is tearing down the entire site and building it from the ground up – one piece at a time.

So far the upcoming changes to Digg v4 seem very attractive. Since the project is five years in the making the company more than likely covered all their bases before they executed their game plan to overhaul the site. Although this might already be in the works, one important feature that I had mentioned to Digg this afternoon was an option to allow users to search for their friends on Twitter so they could connect with them on Digg. For example, if a user enters their Twitter username on Digg’s site, Digg would scan the “following” list on the user’s Twitter page, important the list to Digg, and allow the user to choose which friends to add. The good thing about this method is that there is no need to provide a username or password to Digg in order for them to access your Twitter friends list since it’s public.

Nonetheless, after making this suggestion I received a tweet from Digg that read “@ChrisCredendino Hey Chris, great suggestion! Stay tuned!” Based on the tweet, I assume this feature is in the works, but if not, I just gave Digg a sweet idea.

While Digg offers users several options to add friends, one option I feel needs some work before they launch the new site is the “Find Address Book Contacts” option. There are a couple issues surrounding this method of adding friends to Digg. For starters, not everyone who joins social media sites uses their primary email address when signing up. For example, let’s say you have 10 close friends who gave you their primary email address only. Now, like many people, let’s also say your friends have a secondary or perhaps a third email address they use for different Web sites. Well, if your friends don’t use the primary email address you have for them in your address book you will be unable to import any of your friends into Digg using this method. This also holds true if you choose to use the “Search for Friends.”

The second issue, perhaps the most important, is that a lot of people don’t feel comfortable sharing their username and password with a third party site to gain access to their personal email account. Regardless if the site claims they won’t store login credentials, some users still might have concerns and much rather keep their username and password close to their vest. Although this option has been used for many years by some of the most popular and trusted sites on the Web, it’s being phased out and more secure methods of logging in to email accounts, as well as other sites you belong to, are being introduced.

Enter OAuth, an open protocol that allows you to share your private resources stored on one site with another site without having to forfeit your login credentials. Hopefully Digg already has plans to implement OAuth into their new site, but if not, this is something they should consider.

If you are interested in checking out the new Digg v4 site you can sign up here.