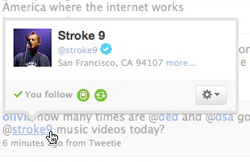 Twitter has just announced a new profile preview feature they are rolling out called “Hovercards.” Hovercards are cards that display additional information about an individual when you hover over a username or avatar in your timeline and will also allow you to interact with the individual without having to navigate away from your Twitter Web page. Hovercards will display basic information about an individual such as their location and whether or not you follow them. However, there is an expanded view of the card that will display their Web site, bio, latest tweet, number of tweets, number of people they follow, number of people that follow them, lists, and a dropdown menu of options. According to the announcement posted on Twitter’s blog, the new feature was developed to make it a simple process for users to access individual’s profile information without having to spend time visiting their profile page. If you access Twitter via Twitter.com then this new feature should make your experience a lot easier when you are interested in gathering information about another Twitter user.

This new feature is being rolled out in stages over time so it is not active for all Twitter users yet. Keep in mind that this feature is only useful if you are using Twitter.com.

While I feel it’s necessary for Twitter to continue rolling out new features that will make the Twitter experience more enjoyable, I have to wonder how many people will take advantage of Hovercards. For example, I access Twitter several times throughout the day and 90% of the time I am accessing Twitter from SocialScope on my BlackBerry. When I’m on the computer I am using TweetDeck to handle all my Twitter needs. It’s very rare that you’ll find me accessing Twitter via Twitter.com so Hovercards is not something I would personally find useful since TweetDeck has a similar profile option. There are many Twitter mobile apps and desktop clients out their nowadays so it will be interesting to see how this new feature works out.