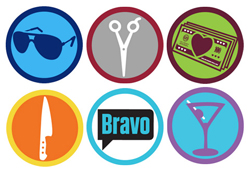 It appears Foursquare has landed yet another media partner, but this time it’s not a newspaper, instead it’s the major cable TV network Bravo. According to the New York Times’ Bits blog, Foursquare and Bravo TV, a division of NBC Universal, will announce a new partnership today that will allow users to unlock Bravo-themed badges when they visit more than 500 Bravo-tagged venues and also have the opportunity to win prizes. Bravo is currently in the process of leaving tips and tagging venues on Foursquare that relate to some of their shows such as “The Real Housewives,” “The Millionaire Matchmaker,” “Top Chef,” “Top Chef Masters,” “Shear Genius,” and “Kell on Earth.” These shows will be incorporated into the gaming aspect of Foursquare which uses the real world as a backdrop.

“Bravo’s shows really overlap with our users and a new mainstream audience that we want to reach. I don’t think check-ins are a nerd-only experience. It’s about sharing content and experiences with others.” He went on to say “With Foursquare people leave content behind for others to find, like tips of the best drink at a bar,” Mr. Crowley said. “With shows that are tied to real locations in real cities enhancing this with content from contestants and judges on Top Chef or another Bravo show is going to make it even more interesting.”

Location-based social media is gaining a lot of traction these days since more people are becoming familiar with services such as Foursquare, Gowalla, and MyTown. As more media companies, universities, and other companies join the location-based social media arena, we can expect these services to continue to grow and offer even more value than they already do for many of us.

As you might have already noticed, I’m a loyal Foursquare user and I enjoy seeing the startup go through the positive changes as it gains popularity. If you’re not already on board with location-based social media, it’s not too late to be an early adopter. I suggest giving Foursquare a try and see what you think.