After mapping out the My Cousin Vinny filming-location tour in Georgia and then heading up to North Carolina to visit my favorite tow-truck-driving repo team, Lizard Lick Towing, I thought it would be neat to create a list of a few other filming locations that would be fun to visit. First up: Detroit’s circus-filled pawn shop, Hardcore Pawn, otherwise known as American Jewelry and Loan.

Although you might have caught an episode or two of the reality series, let me give you a brief summary just in case you’re not familiar with the show. Hardcore Pawn is a reality TV series which airs on TruTV and follows the daily antics of the Gold family as they haggle with obnoxious customers in order to earn a buck or two on the items they buy and sell in their real-life pawn shop. Regardless if the show is scripted, reality, or a combination of both, this show is entertaining.

Usually I plan my filming-location tours in advance so I can document it thoroughly and visit any other near-by filming locations, but visiting Hardcore Pawn was a last-minute decision when my girlfriend and I were driving through Michigan. Since it was only a 30-minute detour we said “what the heck, let’s just do it!”

When we first arrived in Detroit it was fairly simple to locate American Jewelry and Loan. It’s only a few blocks off the highway and the building is massive, you can’t miss it even if you tried – I’d say nearly 50,000 square feet in size. Nonetheless, as we approached the back entrance we realized that it was closed so unfortunately there wasn’t going to be any negotiating with Les on that day. That was a bummer since I take pride in my negotiating skills and would have enjoyed a chess match with Mr. Gold himself.

However, we didn’t let that damper our visit. We shot some video footage, snapped a few photos, and even managed to take a selfie.

Since we’re talking about selfies let’s start with a photo of Savannah and I standing at the front entrance of American Jewelry and Loan. (Take note of the FSU shirt – yes, note it… we are on track to win the BCS national title this year.) 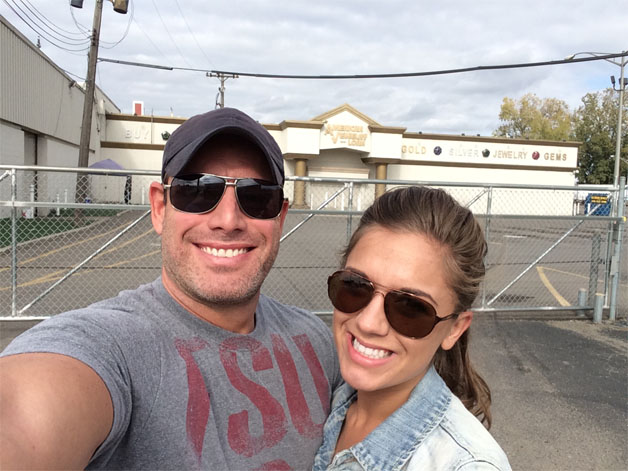