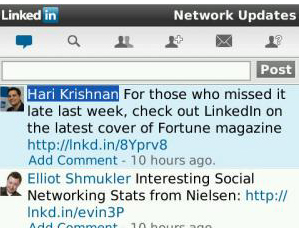 As a BlackBerry user and a LinkedIn member, I was excited to get my hands on this app and I’m sure this will be a very popular app in the professional arena. Although the LinkedIn for BlackBerry app is not as feature-rich as the iPhone app, it does just about everything you need it to do and a little extra. The app features six key modules: Network Updates, Search, Connections, Invitations, Messages, and Reconnect.

1. Network Updates: View and share business intelligence as well as updates with your social network.

2. Search: Search millions of professionals over the LinkedIn network and gather the information you need quickly.

3. Connections: Access to any of your LinkedIn connections, their up-to-date profile information, and the option to send them a message.

4. Invitations: The ability to view and accept invitations.

6. Reconnect: Provides a list of suggestions for new connections.

1. Contacts: Link your your LinkedIn connections with your BlackBerry contacts.

2. Messages: LinkedIn invitations and messages appear in your BlackBerry Inbox just as if they were emails.

3. Calendar: View the LinkedIn profile of any attendee of an event or meeting on your BlackBerry calendar.