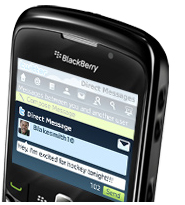 Now that the official Twitter for BlackBerry® app has been officially released to the public it’s worth revisiting this topic to tackle some of the features that need improvement. In February I reviewed the first Twitter for BlackBerry® beta and shared my thoughts about some of the nice features it possessed as well as some of the features that needed improvement. When the second beta was released in early April it was apparent that Twitter and RIM put their heads together to develop an amazing app. The app included new features, improvements to existing features, and the overall speed of the app was superb. However, while the latest beta was very impressive, there were still existing features that were untouched such as the retweet (RT) feature and photo service options.

Will these two features see any improvement?

Unfortunately these two features may not see an improvement any time soon. You see, shortly after Twitter announced their acquisition of Atebits on Friday, I wrote an article about the next company Twitter may try to scoop up and add to their ecosystem. That company is TwitPic, the largest and most popular photo service on Twitter. In my opinion, the only reason Twitter for BlackBerry® has built-in support for TwitPic and no other photo service is because Twitter may soon be the proud owner of the photo service. Time will only tell if a Twitter owned TwitPic will become a reality, but I think most would agree that we are beginning to see a pattern here.

The number one complaint about the Twitter integration of the retweet when it was released last year was that there was no way for a user to edit a tweet. Therefore, those people who were accustomed to the “RT” syntax decided not to use the new RT feature. Unfortunately, Twitter for BlackBerry® has the new RT feature built-in and while users can continue using the “RT” syntax, it’s very time consuming. For example, if you want to retweet one of my tweets that reads “Congrats #Duke! I had them in the championship game, but losing to Kansas.” there is only one way to go about this if you are not using the built-in RT. You would have to select my tweet, copy, paste it into the update tweet box, edit the tweet, and then manually type “RT @ChrisCredendino” to give me the proper credit. There are too many steps involved to retweet at this point and most BlackBerry users I spoke with are very unhappy with this built-in feature. Unless Twitter gets rid of the new RT feature on Twitter.com, Twitter for BlackBerry® will continue to use the same official integration of the retweet.

What features should be improved in Twitter for BlackBerry®?

The one feature that needs improvement is the spell check feature. If you choose to use spell check you have two options. You can either launch the menu and select “Check Spelling” from the list or you can simply use the “Spell Check Before Sending” option and that will automatically check your spelling before the tweet is sent to Twitter. The latter of the two is a lot quicker and helps avoid all those silly spelling mistakes that are made when you are firing off tweets on the go. However, there is one problem using this feature. Let’s say you just typed out a tweet containing 138 characters and after you hit the “Update” button you notice that the automatic spell check found three spelling errors. The result is that you missed three characters which have now been added to the tweet making the total character count 141. Normally that’s a good thing since it avoids sending out a butchered tweet, but since your tweet already contained 138 characters you will be over the 140 character limit. So what happens now? Unfortunately you have to start from scratch and type the entire tweet over again. Why? Well, even though you are given the option to hit the “Retry” button, you won’t be given a chance to edit your tweet to fit within the 140 character limit, thus the tweet will never be sent to Twitter. This issue can be corrected by allowing the user to return to the update tweet box so they can edit the tweet so it doesn’t exceed 140 characters. I ran into this problem twice and since then I decided to use “Check Spelling” from the menu instead of the automatic spell check to avoid this issue.

What features should be added to Twitter for BlackBerry®?

There is one feature I believe would be a crowd favorite – an auto complete friend feature. Although this is not a make or break feature in my opinion, it’s a feature that makes tweeting a lot easier. Implementing an auto complete friend feature will allow a user to choose from a list of Twitter usernames when they begin a tweet using the “@” symbol. This would obviously make the app more efficient so perhaps Twitter will consider this feature in their next release.

Another feature that would be popular among Twitter users is the option to add multiple accounts. Although this is not something I am personally interested in seeing, it’s a an important feature for those people who like to keep their personal account separate from their business account. Keep in mind that this is the first public release of Twitter for BlackBerry® and as Twitter expands their mobile efforts I’m sure we will see a lot of changes in the future.

Overall, Twitter for BlackBerry® is an attractive Twitter client. Hands down, it now leads all other BlackBerry apps when it comes to speed and it also has most of the bells and whistles that make up a great Twitter app. Over the last year or so I’ve experienced every BlackBerry Twitter client on the market and in my opinion Twitter for BlackBerry® is by far the leader when it comes to BlackBerry Twitter apps. Sure, the app doesn’t support multiple social media accounts like SocialScope, but you do have the option to use the powerful hashtag and accompany your tweets with #fb to send a tweet to Facebook and #in to send another to LinkedIn. It’s not in Twitter’s best interest to have RIM develop an app that includes other social media sites, therefore, it’s doubtful that Twitter for BlackBerry® will ever go that route.

If you have not downloaded Twitter for BlackBerry® and want to give it a try you can download it at blackberry.com/twitter.