The Famous General Lee Dirt-mound Jump (real name: Seney Hall)
Although there were a lot of impressive jumps in the first five episodes, one of the jumps I distinctly remember as a kid was the jump over Rosco’s police cruiser in the opening credits of the show, which was taken from the first episode.

The jump took place on the Oxford College campus in Oxford, Georgia. On Saturday, November 11th, 1978, (only 4 days after filming began on the television series) stunt driver, Craig R. Baxley, strapped himself into the General Lee (internally labeled “LEE 1”) and took flight over Sheriff Rosco P. Coltrane’s police cruiser. The jump made television history that day, flying through the air 16 feet high and covering a distance of 82 feet. In order to control the distance of the jump, the stunt crew placed concrete weights in the trunk of the General Lee to compensate for the heavy engine so it wouldn’t overturn mid-flight. This was a common practice for all future jumps performed by the General Lee.

Unfortunately, LEE 1 was wrecked on impact and couldn’t be used in future jump/driving scenes. It was the first and last General Lee to sport chrome rocker panels and only 1 of 3 to display the crossed Confederate and checkered race flags on the panel below the rear window.

The brick building seen in the background as the General Lee is airborne is the beautiful Seney Hall. Although Seney Hall’s exterior was renovated in 2011, as you can see in both photos, the historic five-story building has a similar appearance today as it did in 1978.

The jump was duplicated at the same site in 2005 for The Dukes of Hazzard film. At the time of filming both the television show and movie, vehicles were permitted to travel on Hamill Street, which is the street located in front of Seney Hall, but in early 2013 it became a pedestrian-only zone after it was converted to a brick walkway to match the historic brick paths in the college quad. 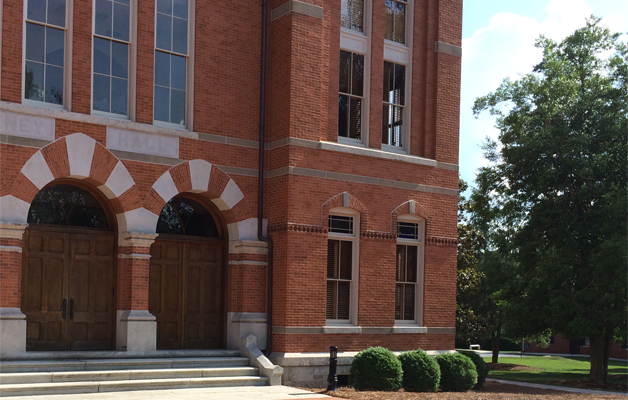 Here’s a photo of Savannah and I in front of Seney Hall at Oxford College.